The 2012 team jersey and shorts retain the distinctive Garmin logo while adding the Barracuda logo, and the signature Slipstream Sports argyle is prominently displayed. Cervélo will continue as a key partner and the official bicycle supplier of the team.

The team will race in the 2012 kit for the first time at the Tour Down Under, starting on Sunday, January 15.

The changes to the 2012 kit are more than cosmetic. The Castelli Speed Research Unit has done its part to make sure the riders have the most comfortable and technically advanced clothing for racing in extreme conditions, from the cold spring classics to the heat of France in July.

Team Garmin-Barracuda already has the most comfortable shorts and the fastest jersey in the pro peloton, but Castelli continues to pursue its goal of creating the world’s fastest and most protective race clothing. 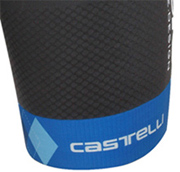 Aero dimples to maintain laminar airflow over the moving leg.

In addition to the innovative cobblestone-conquering SanRemo Speedsuit, Aero Race jersey, and Gabba rain jacket, Castelli has improved the Body Paint shorts (also known as The Best Short Ever by the team riders).

The new single-piece knit construction includes aero dimples engineered right into the fabric on the leg and the back of the short to induce flow separation and reduce aerodynamic drag. The structure is knit right into the fabric, so there’s nothing to chafe or wear out. It all makes the rider go faster.

The Progetto X2 Air seat pad has also received a few small tweaks after another million kilometers of pro testing last year, including perforation for improved airflow and faster drying.

There are some surprises in development that fans will see as the season progresses. The Team Garmin-Barracuda replica pieces will be available beginning in February

For additional information, please visit www.slipstreamsports.com or get a closer look at the new kit here >>