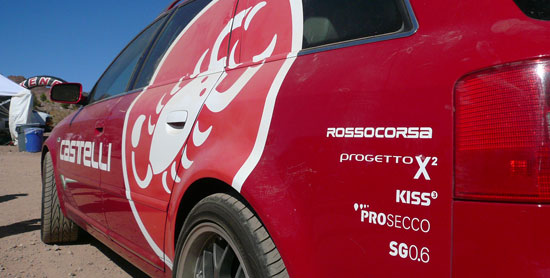 It may have been a boring start of the week for you, but for the bike industry, Monday and Tuesday were days to turn the cranks in the dry, dusty (and somewhat windy) air of Bootleg Canyon, a 25-minute drive southeast of Las Vegas, for Interbike’s 2009 Outdoor Dirt Demo.

Folks from the bike industry had a nice, relaxed and tan-friendly venue to try out the latest in innovations. One such a thing was the Castelli Body Paint bibshort which quickly created a lot of interesst from the media, dealers and other folks from the industry. InterbikeTV was mentioning that this was THE most innovated product at the show. Within two days, the Body Paint bibshorts were online on Twitter/twitpic, Velonews, Triathlon, Bikeradar, bikesnobnyc and many more.

Elite level triathlete and writer, Jay Prasuhn from Triathlon.competitor.com, gives his first impression of the Body Paint innovative shorts after two days in the saddle at Bootleg Canyon.

Jay found it a great chance to catch up with several industry folks in a relaxed, tan-friendly venue. One such visit was with Steve Smith and Soren Jensen of Castelli apparel. We met Smith in February in San Diego when the Cervelo TestTeam, which Castelli sponsors, made a visit to the San Diego Wind Tunnel for some testing with 2008 Tour de France champ Carlos Sastre, and now reigning Tour green jersey winner Thor Hushovd. Smith, a marketing and design manager was present in San Diego to test some aero garments on the athletes, with pieces that saw light of day at the Tour de France.

“We started working on this in 2006 and saw some emerging technologies that weren’t being used in fabrics,” Smith said of the company’s Rosso Corsa, or top shelf short. “We wanted to take what the status quo was for high-end cycling shorts, and take away from the stitching, which is the number one area for failures. We wanted to engineer a high tech fabric that was different than anything else out there. 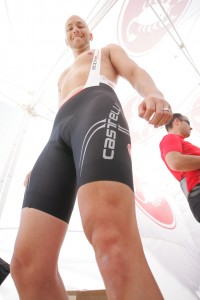 The Castelli guys took me on a tour of this truly unique bib, which goes counter to what the industry contends to be optimal apparel design. While many brands hype the fact that they have upwards of eight panels, Castelli goes 180 degrees, and hypes that BodyPaint has just one panel. The entire front is comprised of one piece of Power Stretch Lycra, wrapping around the thigh, with the sole seam existing at the back. , At the leg grippers, Castelli eliminates the use of silicone, the bottom of the thigh has the leg gripper infused into the fabric. The bib shoulder straps, comprised of Giro++ elastic fabric, extend outward from the inner hips to the shoulders, then curve around the chest, instead of coming straight up the torso.

The white bib portion of the short, like the leg, is not laser cut, but is rather a fine stitched end, meaning the suit won’t unravel. A breathable mesh holds the kit complete in back. The reflective branding down the thigh is integrated into the fabric, so as not to interfere with fabric flexibility.

With just a short ride, it was easy to see how Espinoza could make such a remark; the lack of stitches, we think, actually enhances the mobility of this suit. Like another Italian-ish brand, the bib pulls as you stand up. But cyclists don’t ride standing up. Bent over the bars, this thing is just amazing. The bib straps are so thin and slight, it is easy to forget they’re there. And there really is something to this fabric and its single-seam build, as it moves, dare I say, seamlessly, over the body contours through the pedal stroke. It’s worth the premium. You can skimp in a lot of areas, but I have always contended that a good short is something you should never skimp on.

The Progetto X2 chamois is also quite unique; marrying the two elements a rider desires in a pad—padding and skin comfort, Castelli employs two layers. The cushioning pad is comprised of variable thicknesses of foam, with gel inserts at the sitbones and perineum. The actual contact portion of the chamois has four-way stretch. The cushioning pad is installed under the comfortable, stretchy chamois contact layer, and stitched just once down its length, allowing it to float freely for greater mobility in saddle.
Why does this matter to triathletes? Well, for one, all of us should be in proper bike shorts while training. If you see triathletes training on the weekend up and down the coast highway in their race kit, as I do, you’ll understand why. A proper bike short will do wonders for your riding experience.

Second, this is one of the first companies to make aerodynamic considerations in apparel. It’s one thing to tailor the cut to be more form-fitting. But Castelli’s use of this material, with its lack of stitches, makes this short super aero. Heck, they moved the shoulder stitch in the TestTeam’s time trial skinsuit around to the back, so that the seam was out of the wind. Can you see where this is going? Can you say “Castelli tri kits coming soon?”

“Ever since our work with Cervelo TestTeam in the wind tunnel, we have had some professional triathletes email us and ask us when we’re going to be doing triathlon apparel like this,” said Soren Jensen, Castelli’s global communications manager. Add to that the fact that Smith is taking part in his first Ironman next summer at Ironman Germany, and one can see the impetus to develop a highly technical triathlon apparel line that follows the premise of Body Paint is there.

“We already know what we are capable of aerodynamically,” Smith said. “We’re going to be doing some prototyping, testing fabric properties in the water. So yes, we have some cool technologies for triathlon and we’re working hard on that right now.”